My Experiences Learning to Fly 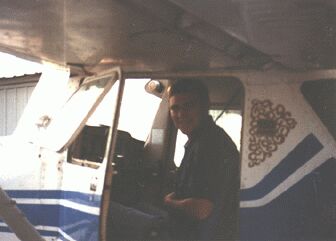 This part of the site is dedicated to my experience in learning how to fly. I started by going for a ride with my great uncle in his Ercoupe. The ride was so fun that I wanted to learn to fly it myself. The aerospace department at the University of Maryland gave up a room one semester to let an instructor from Montgomery Aviation come in once a week and teach ground school. Because a group of us took it, we got a discount on the class.

At the end of the class and the semester, I wanted to learn to fly. As an aerospace engineering major, I also wanted an aviation related job, so when I went home for the summer, I went over to the airport and asked for a job. I got hired as a line boy at Control Aero Corporation at Frederick Municipal Airport (FDK), Frederick, Maryland. I started up taking lessons almost as soon as I started working. My instructor had just started instructing when I started working there, so I was her first student to solo. I picked up on the flying pretty fast. I soloed on July 1, 1997, after 9.3 hrs of instruction with her (The last 0.8 was on the day that I soloed).

I was ready to take the test flying-wise before the required forty hours, so I had to do some flying just to build my hours. I didn't finish up before going back to school, so I had to go back on weekends. After a few weeks, I was ready to take the checkride. Unfortunately, I hadn't studied enough. I knew all the information, but I didn't know it inside and out. I was kind of nervous going in to the oral exam, so because of my lack of preparation, I got all the numbers confused for airspace. I failed the oral exam. I tried coming back every weekend for a while to try to take the exam, but the weather was never good enough. It was starting to be too much of a hassle trying to come home every weekend, so I just put off the exam until winter break. During winter break, me and my family went to Florida for two weeks right in the middle of the break, so I didn't get the license then, either, and I had to put it off until the summer. 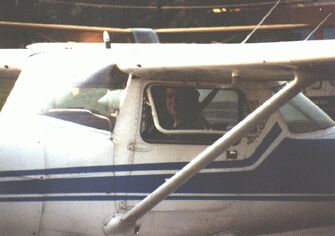 When I came back home for the summer, the company I worked for had quit selling fuel, and they had plenty of mechanics, so I worked as a dispatcher. The weather that summer wasn't as good as the first summer I took lessons, so it took me a while to get some flying in. Once I started flying, I had to brush up on it. I hadn't really flown since the winter break. When my flying was back up to the level it had been, I really hit the books.

When it came time for my checkride this time around, I had everything down pat. I was done the oral exam in an hour, including looking over the log books and doing all the paper work. I was much more comfortable the second time around. I wasn't nervous at all taking the practical exam. I've always been very confident in my flying. The only problem I had on the practical exam was the forced landing. There was another plane ahead of me in the pattern, and it turned from downwind to base very far out. Since I couldn't cut in front of it, I had to make my turn to base too far out, and didn't have enough altitude left to make it to the runway, so I did a go around. The airplane we were flying in did not climb very well, and the examiner was not very comfortable in it, so she did not make me practice a forced landing into a field (She was afraid the airplane wouldn't climb back to altitude). I performed all my maneuvers very close to the airport in case we had to make an emergency landing, but not so close that we interfered with the traffic. The all went very well, as did the rest of the exam and my landing, and I got my license.

The biggest advice I have to student pilots about to take their checkride is to study. The second time I took the exam, I studied the ASA Oral Exam Guide until I could answer every question. I also studied the FAR/AIM a lot. And I started my final studying for the exam a week before I was going to take it, studying every night, and I had no problem when it came time to take the exam.